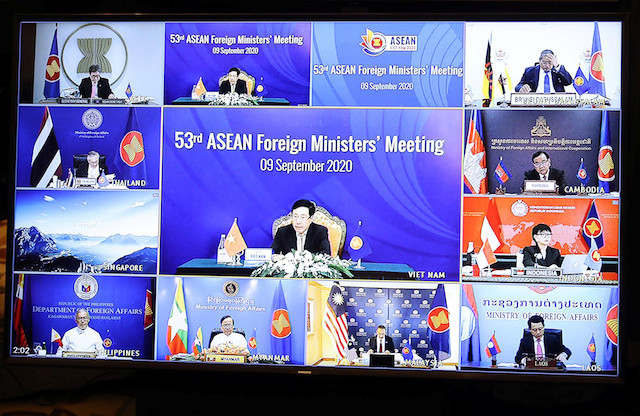 Indonesia is set to sign a trade agreement with South Korea and seeks ensure that a larger deal at the regional level will also be inked, as the country focuses on increasing overseas market access in the hopes of lifting its economy out of the mire of the pandemic.

Foreign Minister Retno Marsudi recently said she would oversee the signing of the Indonesia-South Korea Comprehensive Economic Partnership Agreement (IK-CEPA) in November, a move that confirms the ministry’s increased focus on economic diplomacy.

The IK-CEPA was agreed upon in November of last year after nearly a decade of back-and-forth negotiations with Seoul.

Talks began in 2012 but were put on hold in 2014 because of a lack of progress. Both sides agreed to resume negotiations for the deal last year.

Under the agreement, Indonesia’s industrial, fisheries and agricultural products will get better access to the South Korean market. In return, Indonesia will buy raw industrial materials from South Korea to facilitate South Korean investment in the country.

At the regional level, the two countries are working to finalize a larger, multi-country trade agreement.

“Diplomacy continues to work to encourage the finalization and signing of the RCEP at the ASEAN Summit in November 2020. This message was also conveyed by President Jokowi during his meeting with [Japanese] Prime Minister [Yoshihide] Suga in Bogor [West Java],” Retno told reporters during the briefing.

The 15 RCEP countries finalized a draft of the partnership last year, after India pulled out over differences regarding the scope of tariff reductions.

Measured by population and economic size, RCEP is set to be the largest regional trade bloc in the world, accounting for about a third of global gross domestic product (GDP).

Experts have said it would be the second-most important trade agreement after the World Trade Organization and a crucial one for the economies of the Indo-Pacific as they seek to rebuild regional connections severed by the ongoing COVID-19 health crisis.

As COVID-19 drives the nation toward a likely recession, the Foreign Ministry has allocated additional capital to strengthen its economic diplomacy.

Retno said Indonesia was involved in talks for the ASEAN Comprehensive Recovery Framework, which aims to maintain regional supply chains and the flow of essential goods and investment during the COVID-19 pandemic.

To help business flow smoothly during the pandemic, Indonesia has established essential business travel corridors with the United Arab Emirates, South Korea, China and Singapore. It is also negotiating similar arrangements with other partners, such as Japan and ASEAN.

Retno said Indonesia had begun preparations to open Indonesia’s borders to regular visitors, although no fixed timeline has been set.

In the early days of the pandemic, the ministry formed the Team for the Acceleration of Economic Recovery (TPPE), which allowed it to collaborate with the Investment Coordinating Board (BKPM) and Indonesia’s representatives abroad to secure investment.

The ministry has also collaborated with the State-Owned Enterprises Ministry to explore opportunities for outbound investments, with a focus on construction services, extractive industries, strategic industries and the expansion of power plant operational services.

Some observers say Indonesia has been using economic diplomacy to connect the dots between its bilateral trade relations and multilateral efforts like RCEP, having secured mutually beneficial market access with Australia through the Indonesia-Australia CEPA in early July.

The country has also opened talks for preferential trade agreements with partners such as India and Mozambique.

“In addition, the Foreign Ministry will continue to try to secure Indonesia’s trade with major partner countries. We welcome Indonesia’s increased trade with several partners, including China and the United States,” she said.

Indonesia is in talks to retain trade perks under the US’ Generalized System of Preferences (GSP) scheme, just as US Secretary of State Mike Pompeo prepares to visit the country.

In addition to the greater focus on economic diplomacy, the one-year review showed that the Foreign Ministry had altered the priorities that were set out at the start of the year.

Retno acknowledged that the challenges during the year had been extraordinary. “During the pandemic, we had no choice but to refocus our work priorities,” she said.

The minister said Indonesia would focus on three priority issues for the remainder of the year: protecting Indonesian citizens abroad, contributing to world peace and stability and helping the government manage the pandemic, both in terms of its health and socioeconomic impacts.